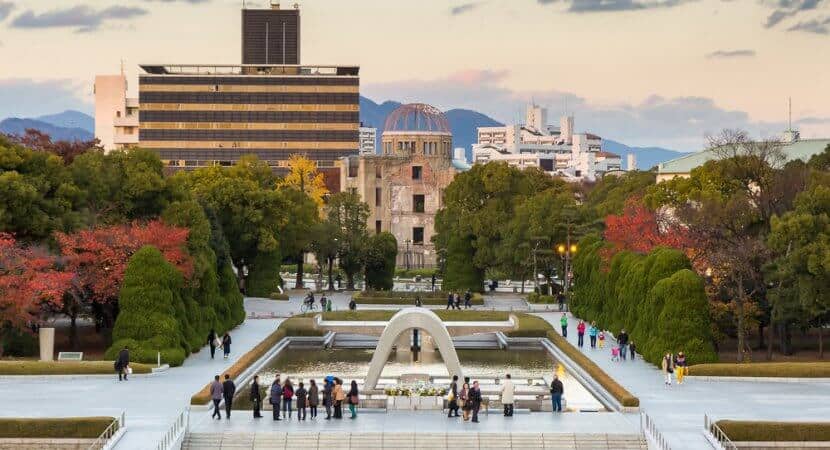 After a visit to the somber Hiroshima Memorial Museum, the Peace Memorial Park is a literal breath of fresh air.

The Park was designed as a prayer for the victims of the atomic blast.

What to See There

The most iconic monument in the park, the A-Bomb Dome stands strong, providing testament to what happened here many years ago.  The A-Bomb dome is what remained after the atomic bomb was dropped on Hiroshima.

This building was close to the hypocenter of the bomb, and remained partially standing after the blast.  It was left untouched, in memory of all the people who perished in the blast.  It became a UNESCO World Heritage Site on December 7th, 1996.

At its center, the Cenotaph looks across the Flame of Peace, which will burn until all nuclear weapons are eliminated.

Many other memorials are dotted throughout the tree-lined park.

The Story of Sadako

The most well-known of these is the Children’s Peace Monument, inspired by the life of Sadako Sasaki. Sadako died of leukemia following radiation exposure.

During her time in the hospital, she would fold origami cranes out of whatever paper should could find.

There is a Japanese legend that a wish would be granted to anyone who folds one thousand of these origami cranes. Surrounding the monument, plastic boxes hold collections of origami cranes folded in memory of Sadako by school children around the world.

Browsing the boxes, you can see the impact of Sadako’s story on children as far away as Australia.

Relaxing in the Park

The park is a perfect place to sit and digest what you have witnessed in the museum. It’s soothing any time of day.

Early in the morning, you can see salarymen and schoolchildren on bikes cutting through the park on their way to the office or to school.

Later in the day, Hiroshima residents walk their pets through the park. Many people pause by the Cenotaph to say a prayer or make an offering to the victims, but the overall mood is that of a thriving, living city.

The Peace Memorial Park is the heart of Hiroshima. It is fitting that here, at the sight of the tragedy, Hiroshima’s energy and life is evident. Whenever I visit Hiroshima, someone always strikes up a conversation with me. The people of Hiroshima are incredibly welcoming to international visitors.

Many of my conversations with people in Hiroshima take place around the Atomic Bomb Dome. This iconic building speaks powerfully to the devastation left by the bombing. It also speaks to the strength of Hiroshima’s people.

While often serious, the conversations I’ve had with residents don’t touch on blame, but on the future. Hiroshima people want to know that the message contained in the Park and Museum will be communicated around the world.

From JR Hiroshima station, you can either take a bus or streetcar.

By bus: Exit JR Hiroshima Station at the south exit. Take the red bus (Hiroshima Bus) headed for Yoshijima. Get off at the Heiwa Kinen Koen (Peace Memorial Park) stop.

By Streetcar: Go out the south exit of JR Hiroshima Station. Take a streetcar headed to Eba or Miyajima-guchi. Get off at the Genbakudomu-mae (the A-bomb Dome) stop.