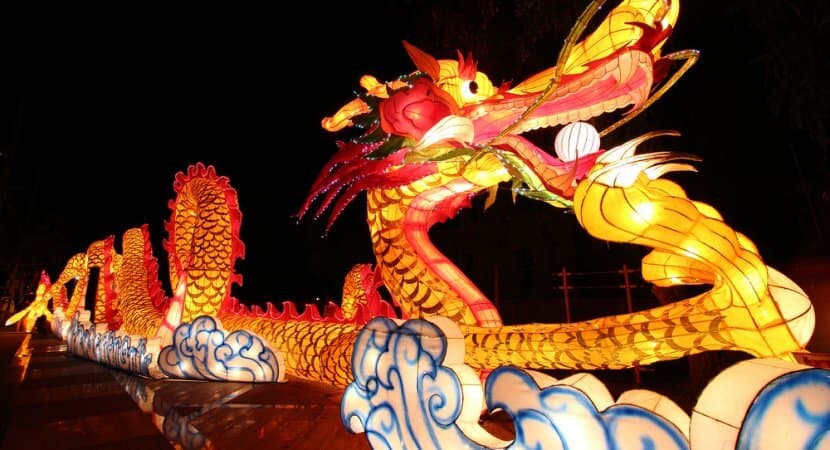 Nagasaki has the oldest Chinese temples in Japan. The city has some of the finest Ming Dynasty temples in the world. This might seem odd, but the mystery is easy to explain.

Nagasaki has a long history of trading with Chinese merchants. Many merchants settled around the port; they built one of the oldest Chinatowns in Japan.

Most of Nagasaki’s population converted to Christianity in the late 1500’s. As a consequence, the town demolished their Japanese Buddhist temples.

Chinese residents received permission to build temples of their own. They built them in Chinese styles that reminded them of home.

Today the temples provide Nagasaki with a unique cultural heritage. Their design is different from most of the other temples in Japan. The Chinese Temples are the best examples of Ming architecture outside of China.

In addition to the Chinese Temples, Nagasaki has a lively Chinatown. The annual Lantern Festival starts here. The festival is a big deal in the city, and not just in Chinatown… everyone gets involved in the fun!

Things to Do In Nagasaki’s Chinatown

Kofuku-ji is the oldest Chinese temple in Nagasaki. It dates from around 1620.

Kofuku-ji was the first temple of the Obaku school of Zen Buddhism. The Kofuku Temple features a truly unique design. It mixes aspects of Chinese Ming architecture with elements of Japanese construction. Even in tera-machi (temple town), the temple’s red gate really stands out.

Merchants from the Yangtze area built the temple. They gave it the nickname “Nanjing Temple.”

When the temple suffered damage in 1863, it was repaired with timber from China.

The temple has one of Nagasaki’s most enduring landmarks, the Spectacles Bridge.

This stone bridge was built in 1634. The arches on the bridge look like a pair of glasses when you look at the bridge’s reflection in the water.

The bridge is a fantastic place to take a picture or two. You’ll find your true love if you make a wish on the heart-shaped rocks on the bridge… according to the local folklore, anyway. I tried this, but so far it hasn’t worked.

The temple grounds have many important cultural artifacts on display.

The artifacts include a giant glass lamp made in Shanghai and antique fish-shaped drums. Several buildings have been designated important cultural properties by the Japanese Government.

Visitors can enjoy green tea and sweets in the teahouse. You can also try the traditional vegetarian cuisine eaten by monks.

Sofuku-ji is one of the finest examples of a Ming Dynasty temple in the world. Many of Sofuku-ji’s buildings were built in China and shipped to Japan.

Sofuku-ji was built in 1629. It was originally a family temple for Chinese residents from the Fuzhou district. It’s now a Zen temple.

The Buddhist Hall is Nagasaki’s oldest building. The design reflects Chinese architecture of the early 1600’s. This makes it unique in Japan.

The temple has 2 national treasures and many interesting artifacts. A few of them are quite unique.

The main Buddha statue has internal organs made of silver. The huge ornate cauldron is also something you don’t see every day. The temple priests fed 3,000 people with the cauldron during a famine in 1681.

Sofuku-ji is at the center of the Chinese community’s Obon celebrations. Chinese people come from all over Japan to enjoy the festivities. The celebrations take place in late July every year.

Nagasaki’s Confucius Shrine dates back to 1893. It’s the only Confucian shrine outside China built by Chinese labor. In fact, the land is still under the jurisdiction of the Chinese consular office in Tokyo.

The original shrine was destroyed by the atomic bomb in 1945. It was rebuilt in 1967 and further restored in 1982.

The Chinese-style cascading roofs, bright lanterns, and seventy-two statues give the shrine a unique look. The statues represent the seventy-two followers of Confucius.

The grounds had a school when the shrine was built. Sadly, the school was lost in the bombing and never rebuilt.

The shrine is home to the Historical Museum of China. The museum contains photos and pictures depicting the Silk Road. It also has the world’s first seismograph.

There’s a revolving display of art and ceramics. They’re on loan from the National Museum of China and the Palace Museum in Beijing.

Nagasaki’s Chinatown is the oldest of the three major Chinatowns in Japan.

The Chinese community remained in Nagasaki after the shogun closed Japan’s borders in 1689. Nagasaki was the sole port where the Chinese could still trade.

They were subject to many restrictions. Nagasaki’s ruler made them live in a designated Chinatown. Only priests and geisha could enter.

The Chinese residents could only leave the area to go to their temples. In spite of this, their culture continued to spread throughout Nagasaki.

At one point Nagasaki had 10,000 Chinese residents. They were mostly merchants from the Fujian region.

Chinese residents were originally confined to the hill areas. Once restrictions lifted in 1859, the Chinese settled in Shinchi.

Today, the Chinatown has about 40 stores. The stores sell Chinese food, groceries, and souvenirs. I suggest you try the champon or sara-udon. Both are local favorites.

The four entrances to Chinatown have ornately decorated gates.

Craftsman from China’s Fuzhou province built them. They compete with the gates of Kobe’s and Yokohama’s Chinatowns for the title of coolest Chinese gates in Japan. Personally, I like these the best.

Each gate has a statue of the animal god associated with the gate’s direction. North is the Black Tortoise, south the Vermilion Bird, east the Azure Dragon, and west the White Tiger.

Nagasaki’s Shinchi Chinatown was the birthplace of Nagasaki’s Lantern festival. It’s now a major festival that takes place throughout the city.

The lantern festival was once only celebrated by Nagasaki’s Chinese residents. The entire city has embraced the festival since 1994.

It’s now a major event, with over 15,000 lanterns spread across a variety of venues.

The festival takes place during the Chinese Lunar New Year, but that actual dates change every year. The festival usually takes place in early February to early March. Check out the Nagasaki Tourism Website for more information.

It starts with a ceremony and fireworks at Minato Park. There are a variety of events over the course of the festival.

The Events at the Festival Can Include

Is Nagasaki Chinatown Worth Visiting?

Nagasaki’s Chinatown is a great way to explore Chinese culture. If you’re preparing for an upcoming trip to China, immersing yourself in Nagasaki’s Chinese heritage isn’t a bad idea.

I recommend visiting if you’re someone who grasps history more from buildings than from books. The buildings give you a sense of the history of the area.

Taking in Sofuku-ji’s unique architecture is a must. The food in Shinchi Chinatown is as authentic as it gets outside of China.

How to Get Around Nagasaki

Nagasaki has four tram lines and only one train line. This is unusual for a Japanese city.

The JR Main Nagasaki Line ends at JR Nagasaki Station. From there, it’s a five-minute tram ride or one-kilometer walk to the city center. The majority of Nagasaki’s attractions are in the city center.

The Nagasaki Electric Tramway runs the lines. The tram lines will get you to the main tourist destinations. They also connect to the three port terminals.

You can transfer between trams one and five for free, but only at Tsuki-machi Station. You’ll get a transfer ticket when getting off the tram. You pay when you get off. If you use a transport card, swipe it both when you enter and leave the tram.

You can also get around the city by bus. The fare depends on the distance you go and the route your bus takes. There is a monitor (usually at the front of the bus) that displays all of the prices. You pay the fare corresponding to the numbered ticket you picked up when you got on the bus.

You can also buy a one-day pass for the bus.

Nagasaki has affordable public transportation. You’re unlikely to need a taxi during the day.

However, public transportation stops running after 11:00pm. A taxi is your only option for getting back to your hotel after a night out.

Be aware – a twenty percent surcharge gets added to the fare automatically at night!

You’ll find taxis outside major train stations. You can also hail them in the street.

Visit Nagasaki Transportation Page: An English pamphlet explains the city’s transportation options. You can get the pamphlet at tourist information centers or online.

Most of the city’s foreign heritage attractions are in the same area of the city. This makes sightseeing a breeze. You can walk between sights or buy a one-day tram pass and hop on and off the trams.

The Visit Nagasaki organization offers tourist information pamphlets. The pamphlets divide Nagasaki into zones based on the main attractions in each area. This makes it easy to identify where you want to go. The pamphlets help you see the most with the least amount of travel.

Have You Been to Chinatown in Nagasaki?

How does it compare with other Chinatowns? What did you do there? Did you visit the Chinese style temples? Let us know in the comments.

Has anything in this article made your must-visit list? What do you want to see the most?