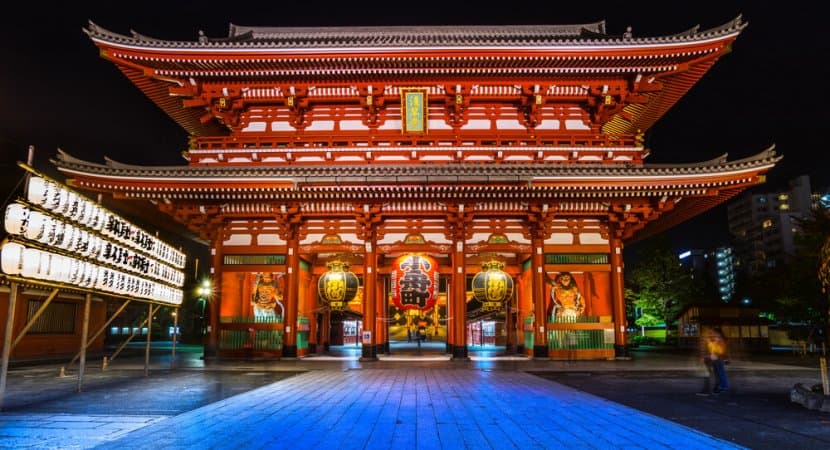 Sensoji isn’t the just oldest temple in Tokyo. It’s actually much older than Tokyo itself.  The temple drew crowds when Tokyo was a sleepy fishing village. It’s still popular today, despite the many attractions Tokyo offers.  The skyscrapers in the area dwarf the main hall, distinctive gates, and five-story pagoda.

Don’t be put off by the crowds—they’re part of the fun! Senso-ji’s festive atmosphere recreates the temple of the Edo-period.  Temples traditionally played a large part in the lives of Tokyo residents. Senso-ji continues the tradition with events and parades throughout the year.

No matter when you visit, you’ll enjoy Senso-ji’s bustling atmosphere.

Tokyo was a small fishing village known as Edo. Asakusa was another small village. Both sat on the bank of the Sumida river.

Legend has it that one day in Asakusa, two brothers were fishing in the river. They found a statue in their net. Amazed by the statue’s beauty, they took it to the village headman.

The headman recognized the statue as the Bodhisattva (Buddhist saint) Kannon. He devoted his life to the statue. The headman became a monk and turned his house into a shrine.

Word of the statue spread. In 645 A.D., a Buddhist priest, Shokai Shonin, visited Asakusa village. From a vision he had in a dream, he advised the headman not to show the statue to the public and built Kannondo Hall.

After Shokai Shonin’s visit, Senso-ji became a popular pilgrimage site. It attracted the attention of generals, high-ranking priests, and even the Tokugawa shogunate.

When Edo became the capital of Japan, Asakusa village became a district within the city.

Tokugawa Ieyasu, the first Tokugawa shogun, took an interest in Senso-ji. Because of his influence, the temple grew to a gigantic size.

What You Can Do At Sensoji Temple

The first hint of Senso-ji’s size comes as you approach the temple gate. The main gate is bright red with a huge red lantern in the center.

The gate is known as the Kaminarimon (thunder) Gate. Two scowling statues flank each side. The two statues are the gods of wind and thunder.

When you enter, pause a moment and look up at the lantern. On its base is a relief carving of a dragon, a nod to the temple’s official name, “Kinryuzan” (golden dragon mountain).

As you pass through the gates, you’re greeted by rows of stalls. This is Nakamise-dori, the “street shops within the temple.”

The shopping street dates from the Edo-period. Some souvenirs target the modern tourist (like battery operated fans). Others evoke Senso-ji’s past.

On the shopping street, you can try snacks the early pilgrims enjoyed.

I recommend the senbei — crunchy rice crackers available in a variety of flavors. Or, try kibidango — chewy rice cakes dusted with soybean powder.

The jumbo-sized melon pan gets its fluffy texture from a long rising process. Crunchy crystallized sugar on top completes the pastry.

From one stall, Kagestsudo grew to have branches all over Asakusa. Look for their store to the left of the Kaminarimon Gate, or their stall on the right side of the shopping street. The main store is close to the pagoda.

The shopping street ends with another imposing gate — The Hozomon Gate (Treasure-House Gate).

You’ll see two more guardian statues. The statues are of famous sumo wrestlers (according to oral tradition). Like most of the temple, the original statues were destroyed by bombing in WWII. The statues were rebuilt in the 60’s.

Wondering about the huge straw sandals on the back of the gate?

The people of Murayama village make the sandals. They make them to thank the government for relief when the village suffered damages from snow.

Stepping through Hozomon, you’re met by ornate metal incense containers. You can buy sticks of incense from the offices to your right (along with charms and prayer beads). Or, simply waft the smoke over yourself to purify before approaching the Hondo (main hall).

The Hondo is a replica of a building constructed by Tokugawa Iemitsu — the third Tokugawa shogun. The original building perished in bombing during WWII.

The new building preserves the scale and appearance of the Edo-period temple. The statue inside the temple is a replica as well.

The Kannon statue found by the brothers hasn’t been seen since it was hidden on Shokai Shonin’s advice in 645 A.D.

But don’t worry… there’s plenty of artwork to admire within the Hondo.

There are few five-story pagodas in Tokyo; Senso-ji has one of the finest.

You can’t enter the pagoda unless you have family buried there, but it is striking.

The View of the Skytree

From Senso-ji, you get an excellent view of the Tokyo Skytree.

You can take a photo with the Skytree in the background. The Hondo is the foreground, capturing old and new Tokyo in one image.

To the right of the Hondo is what seems to be an anomoly—tori gates leading to a Shinto shrine. Asakusa-shrine commemorates the fishermen whose actions led to the founding of Senso-ji.

The shrine doesn’t offer much compared to Senso-ji. Even so, the peaceful interplay of the two religions is worth appreciating.

Senso-ji hosts many festivals throughout the year. Some are specific to the temple itself. Others, like Setsubun (bean-throwing festvial), are celebrated throughout Japan.

Setsubun is the time for spiritual spring-cleaning. It’s associated with the new year on the Chinese Calender. Demons are driven out to welcome prosperity and good fortune in their place.

Huge crowds throng to the temple to see the Fukuju-no-mai (Dance of the Seven Gods of Fortune). After the performance, celebrities and priests toss soybeans, candy, and envelopes of money at the crowd.

On March 18th, Senso-ji celebrates its founding with Kinryu-no-mai (the Golden Dragon dance).

The dazzling golden dragon is 18 meters long and accompanied by traditional music.

On the second Saturday of April, the Ichiyo Sakura Festival takes place.

The Edo Yoshiwara Oiran-dochu parade replicates an Edo-period parade. It’s complete with elaborate costume and makeup. The parade is the highlight of the festival. It’s accompanied by traditional musical performances and flea markets.

Around the same time, the Shirasagi-no-mai (white heron dance) is held. It’s the revival of a Heian-period event. In addition to the dance, a parade in Heian period costume takes place.

Sanja Matsuri: A Crazy and Spectacular Sight to See

In May, Asakusa-shrine hosts its biggest event of the year, the Sanja Matsuri. It takes place on the third weekend in May.

It honors Senso-ji’s founders, the two fishermen and the village headman. Known as one of Edo’s three great festivals, it draws huge crowds every year.

The mikoshi gets paraded around Asakusa, accompanied by participants in colorful costumes. The costumes include geisha, musicians, heron-dancers, and city officials in ceremonial dress.

The grand parade takes place Friday. On Saturday, over 100 mikoshi from the 44 neighborhoods of Asakusa make a journey to Senso-ji. They pay their respects before being blessed at Asakusa Shrine.

On Sunday, the three mikoshi containing the gods of Asakusa shrine make a tour around Asakusa. They return to the shrine late at night for a lavish welcome.

Throughout the festival, hundreds of food stalls go up throughout Asakusa. There are performances featuring the taiko (Japanese drum) and other traditional instruments.

Battledore is an early form of badminton. In Japan, New Years is a time to play traditional games.

You can buy wooden rackets, kites, and New Years decorations. The rackets are ornamental and believed to bring good luck. They’re elaborately decorated, and they make fantastic souvenirs.

Is Senso-ji Worth Visiting?

Senso-ji’s size, history, and crowds all combine to give it a one-of-a-kind feeling.

Other temples are older and haven’t been rebuilt. Even so, Senso-ji’s atmosphere makes it special. It’s not only unique in Tokyo, it’s unique in Japan!
Hours

At night, the temple buildings are lit up until 11pm. You can take striking photographs contrasting the buildings against the city lights.

Admission is free, but you can leave a donation.

Senso-ji is nearest to Asakusa Station. Confusingly, there are two stations with that name. They serve different lines.

The one you want is the Tsukuba Asakusa Station.

From Tokyo Station, it takes about 20 minutes to reach Asakusa (Tsukuba).

The Tsukuba Asakusa Station is closest to Senso-ji. It bypasses Kaminarimon and Nakamise dori.

Another Option to Get There

To get the full experience, arrive at Tobu Asakusa Station. It’s the original terminal station of Tokyo’s first subway line. From Tokyo station, it takes about 15 minutes and includes a subway transfer.

There are two options.

You can take the JR Takasaki towards Kagohara, getting off at Ueno. Transfer to the Tokyo Metro Ginza line towards Asakusa (330 yen – around 13 minutes).

Or, take the Yamanote line towards Osaki, get off at Kanda, and transfer to the Ginza line towards Asakusa (310 yen – around 17 minutes).

Senso-ji retains the air of old Tokyo. Make the most of the atmosphere.

Enjoy two other Asakusa attractions with a Showa-era feel.

Hanayashiki is Japan’s oldest theme park and offers a variety of rides. The attractions are small and old-fashioned, but that’s the park’s appeal.

Sometaro has served okonomiyaki since 1937. The pancake dish is a staple of Japanese fast food.

Sometaro is a 10-minute walk from Senso-ji. The restaurant retains the atmosphere of the Showa period with an understated interior. You cook your okonomiyaki yourself, but don’t worry. The staff will assist you if you need help.

Have you been to Senso-Ji?

If so, tell us about it in the comments. What did you like most? Did we miss anything you’d recommend?

Don’t forget to share this article with your history and temple loving friends.

Or are your friends a bit more festive? If so, the parades, events, and festivals might be right up their alley. Either way, they’ll thank you for sharing.