Home
Useful Japanese Lessons
How to Say Brother in Japanese 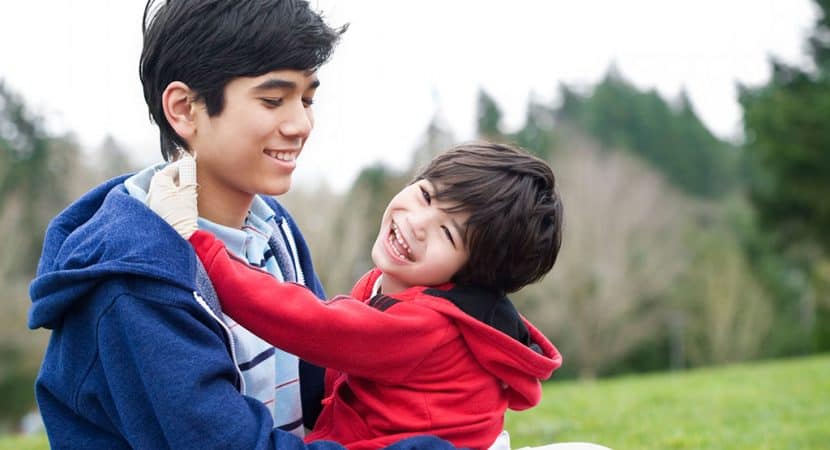 7 Ways to Say Brother in Japanese

Let’s look at 7 ways Japanese people say brother, and examples of each.

As mentioned at the beginning of this article, 兄 (ani) is the general term for your older brother in Japanese. Ani is the word you would use to talk about your older brother to other people. It is a fairly polite word but doesn’t come across as overly formal. Ani is appropriate for any company or conversation.

While お兄さん (onii-san) has the same kanji as ani, its reading is different. Onii-san means big brother in Japanese. It’s more often used to speak to one’s big brother, although it’s acceptable to say onii-san when referring to someone else’s brother in casual conversation.

Onii-san can also be used as a title for young men, although this rule is typically confined to children and the elderly. “Tough guys” may also call a young man onii-san; the nuance to this title is often friendly and casual.

Variants of the word onii-san are 兄さん (nii-san) and お兄ちゃん・兄ちゃん (onii-chan・nii-chan). These titles are more affectionate, holding the same nuance as the English nickname bro or big bro.

Like onii-san, 兄貴 (aniki) is a way to say older brother in casual Japanese. Aniki may have been initially limited to formal Japanese, but it is currently considered impolite to use the word in formal conversations. Aniki is sometimes used to speak to one’s older brother, although this is often done as a joke.

Aniki can also be used to refer to one’s senior within a work-related or social group. When used for an older brother, aniki should be limited to casual conversation with people in your circle or age group.

弟 (otouto) means little brother in Japanese. It is always used when talking about your little brother (to someone else). Japanese people may call their older brothers onii-san, but they will always refer to their younger brothers by name and never by otouto-san. This may have to do with the role that age plays in Japan’s social hierarchy.

However, when you add “san” to otouto (otouto-san) it becomes a polite way to refer to someone ele’s younger brother.  See example #2 below.

兄上 (ani-ue) is an archaic way to say older brother in Japanese. The title was mainly used within samurai households of pre-Meiji Japan. People of the day might refer to their older brothers as ani-ue (literally honored brother) or the more respectful お兄様 (onii-sama). However, in modern Japanese, both titles sound out of place. You might find them in period literature or other media.

Many Japanese people mistakenly use the word 兄弟 (kyoudai) to mean “siblings” in Japanese. The true meaning of kyoudai is male siblings or brothers*. The meaning is in the kanji: 兄 (older brother) and 弟 (younger brother).

That said, kyoudai is implicitly a plural word. You can’t say 私の兄弟 (watashi no kyoudai) to mean my brother. It will always mean my brothers. Kyoudai is a useful word for describing your family members or home life to someone else.

*Important Note: While kyoudai does mean brothers, it’s used when you want to ask someone if they have any siblings or inquire how many siblings they have (example #3 and 4 below).

There aren’t as many words for brother in Japanese as there are for mother or father, but the rules are a bit more specific. Remember the difference between older brother (兄, ani) and younger brother (弟, otouto), and you’re ready to go!  If you want to learn how to speak Japanese naturally, check out more of our free guides. If you’re looking for the best program or lessons to improve your Japanese, we highly recommend Japanesepod101.