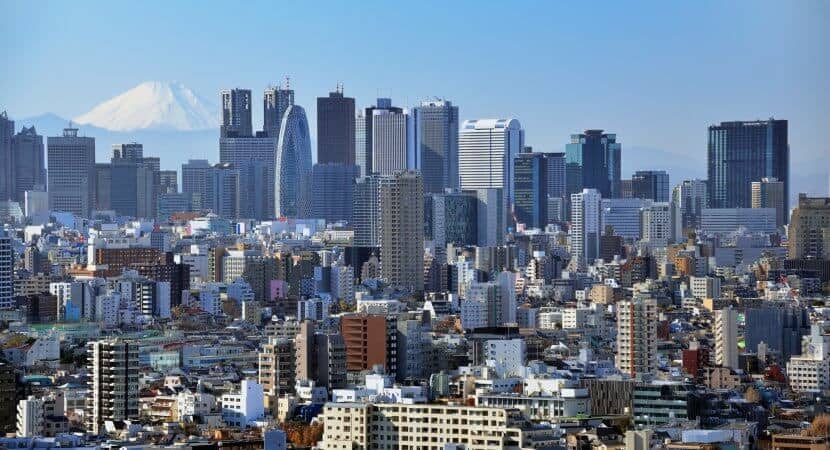 Daytime Shinjuku: Something for Everyone

Shinjuku’s skyscrapers are an iconic Tokyo sight. If you’ve ever seen a clip of Godzilla pushing over a skyscraper, chances are you’re looking at Shinjuku.

Since 1991 when the Tokyo Government relocated to Shinjuku, the district has enjoyed a reputation as Tokyo’s political center. It’s also a thriving business hub. Shinjuku Station holds the world record for the busiest train station in the world. An average of 3.64 million people passes through Shinjuku Station on any given day, mostly office workers heading for jobs in the skyscrapers.

For most tourists, Shinjuku is better known for its nightlife, in particular, Kabuki-cho, the red-light district with bars and questionable entertainment.

In recent years, as Shinjuku’s nightclubs moved elsewhere, the district has become a daytime destination. Shinjuku has a wealth of shopping opportunities, one of the best parks in Tokyo, incredible views, and some quirky tourist attractions—including the ward’s tourism ambassador, Godzilla.

View Tokyo from its political heart. The Tokyo Metropolitan Government Building has two Observation Decks in its North and South towers that are open to the public.

From the first floor of the main building, take the Observatory Elevator to the 202-meter high observation decks. In addition to offering a great view of the surrounding skyscrapers, you can see Tokyo highlights including the Tokyo Dome, the iconic sporting arena, and nearby Meiji Jingu Shrine. You can also see the Observation Deck’s main rivals, the Tokyo Tower, and its successor, the Tokyo Skytree. On a fine day, you can glimpse Mt. Fuji, 138 km away.

Since the Metropolitan Government Building is a place of work first and a tourist attraction second, there are some differences between this and its competitors. When entering the building, be prepared for a security check including a bag search.

There is a cafe in the South Tower and a cafe in the North Tower that becomes a bar in the evening, but there is a lack of souvenir stores. However, the excellent Tokyo Tourist Information Center is located on the first floor. Open from 9:30-18:30, seven days a week, the Tourist Information Center staff offer information on Tokyo’s major attractions, help with route finding, information about accommodation services and travel beyond Tokyo, volunteer guides, and free Wi-Fi.

If you’re deciding on which Tower to go to, here’s your best best. Visit the South Tower in the day, and the North Tower at night for the best views.

Shinjuku Gyoen is possibly the most beautiful park in Tokyo, a claim to fame made more impressive by the caliber of the competition. Yoyogi Park may be livelier, and Ueno Park might be bigger, but Shinjuku Gyoen holds its own.
All three of its main gardens, the English landscape garden, Formal French Garden and Traditional Japanese Garden, are beautifully landscaped and impeccably maintained.

The site has been a garden since 1172 and has been an experimental agricultural center and botanical garden before becoming the Imperial garden it is today. Although open to the public, it is occasionally used by the Imperial family such as in 1989 when the garden hosted Emperor Showa’s funerary rites.

In spring, Shinjuku Gyoen is a popular place to view cherry blossoms. The 1,500 cherry trees in Shinjuku Gyoen are made up of three varieties which bloom at different times, making for a viewing season lasting from late March to late April.

Shinjuku Gyoen is an ideal place for hanami, the practice of picnicking beneath the cherry trees. Because the park closes in the evening and forbids the consumption of alcohol within the park, Shinjuku Gyoen is less popular with Japanese hanami enthusiasts. So it is a little easier to find picnic space and have more room to enjoy the blossoms with your family.

Shinjuku Gyoen is beautiful during the autumn too, when the striking color of the changing leaves is in full force. The roses of the French formal garden come into their own at this time. In November, the park hosts an exhibition of Chrysanthemums.

Even in winter, the greenhouse is worth a visit, with over 1700 tropical and subtropical plants on display.
Another highlight of the gardens is the Taiwanese Pavilion. From the second floor of the pavilion, you have a fantastic view of the Japanese garden. There’s also the Imperial Rest House, built in 1896 for the Emperor’s use, and now an important cultural property.

The Samurai Museum: Honor Above Life

The small, two-story museum is jam-packed with information about the samurai period. The museum’s focus on the 700 years from the end of the Heian period through to the Edo period allows it to go in-depth on samurai in a way other museums can’t.

The exhibits are displayed in a setting that subtly reproduces samurai-period dwellings. The museum offers visitors the chance to dress up in samurai armor, witness a sword drawing exhibition, or try calligraphy as practiced by the samurai.
The museum’s user-friendly nature means it is ideally suited for casual visitors, while the depth of information presented means even seasoned samurai aficionados will learn something new.

I was surprised to learn which weapons had the greatest impact on samurai life. It takes half an hour to an hour to go through the exhibits on your own, but it is worthwhile joining a guided tour of the museum.
Check out the video below for a cool introduction to this museum:

Godzilla has an affinity for Shinjuku—or stomping on Shinjuku’s skyscrapers anyway. While he may be a beloved Japanese icon, you’d expect Shinjuku to have ill feelings towards him. This is not the case!
Despite the destruction Godzilla leaves behind him, Shinjuku has welcomed him, naming him the ward’s cultural ambassador.

Hotel Gracery has gone even further. In 2015, the hotel unveiled a gigantic Godzilla head, peering over the lower part of the hotel building in preparation for a rampage. It gets even better.

From midday until 20:00, Godzilla roars and breathes steam on the hour. The street leading up to the hotel offers the best backdrop for a selfie with Tokyo’s biggest celebrity.

The hotel lobby is a must for Godzilla fans. There are movie posters on display and a small souvenir store. The cafe serves Godzilla themed snacks at high prices—the Godzilla cake set with coffee is 1700 yen

If you’re after an only in Japan experience, rent one of Hotel Gracery’s Godzilla view rooms. These rooms allow guests to look out at Godzilla—and Godzilla to look in. While this might not be a pleasant experience for everyone, the Godzilla view rooms are so popular, they’re booked out months in advance.  If you want to stay here, be sure to check for availability and make a reservation as early as possible to secure a room.

If you manage to secure one, you’ll receive a goodie bag of Godzilla memorabilia. For the ultimate Godzilla fan, go for the Godzilla penthouse on the top floor. Godzilla’s claw breaks through the wall above the bed, and a selection of movie memorabilia decorates the room. A Godzilla view room starts at 21,650 for one person.
Check out this video for a look at this hotel and the Godzilla Room:

Is Shinjuku in the Day Worth Visiting?

Absolutely. Shinjuku’s skyscraper district is not representative of Tokyo, but it is part of what makes Tokyo, well, Tokyo. It should be visited at least once, but chances are you’ll be coming back. The variety of sights means that you can spend a day or half-day here without being bored, no matter who you’re traveling with.

As a major transport hub, Shinjuku is easily accessible from anywhere in Tokyo. Shinjuku Expressway Bus Terminal (known as Basuta Shinjuku) is a major hub for Japan’s excellent highway bus network. It’s also linked by limousine bus to both of Tokyo’s airports, Narita and Haneda.

Shinjuku Station is huge and quite confusing. It incorporates the JR Lines, the Odakyu Electric Railway, Keio railway lines, and the Tokyo Metro and Toei Subway lines.

Thanks to the presence of the Expressway Bus Terminal, Shinjuku is a convenient place to start or end a trip to Tokyo. If you arrive early in the morning courtesy of an overnight bus, why not refuel with a leisurely breakfast and free coffee refills in one of the many family restaurants around Shinjuku (there are 3 Denny’s within walking distance of Shinjuku Station), until 9:00 when Shinjuku Gyoen opens.

If you’ve got time to kill before an evening bus departure, arrive in Shinjuku in the afternoon to sightsee before ending your night at one of Shinjuku’s bars to wait for your bus.

Shinjuku is home to some great dining opportunities. Most of the restaurants have lunch sets aimed at the many office workers in the surrounding buildings. These lunch sets are great value for money, offering the chance to dine affordably at some of Tokyo’s best restaurants.

Navigating Shinjuku Station is confusing, even for seasoned travelers. Whenever possible, look up the exit nearest to the place you want to visit and navigate using that exit. This will reduce the time you spend walking dramatically and save you time.