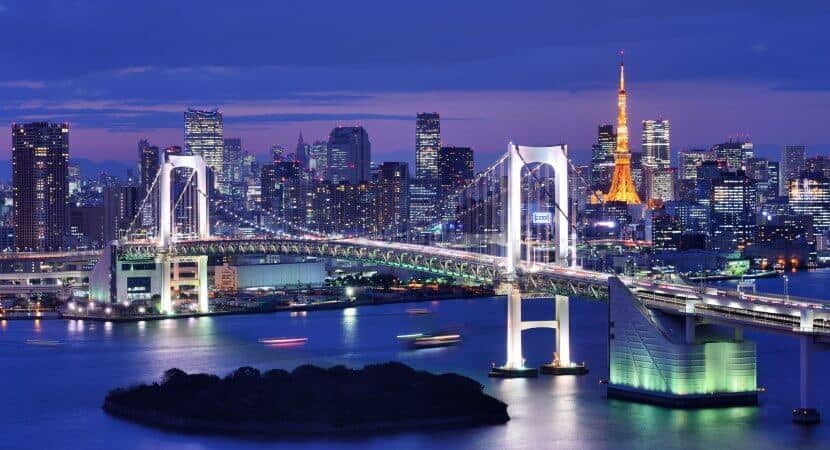 It is very easy to spend money in Tokyo. Between the world-class shopping available in Ginza and Odaiba’s mega-malls, the bargains at Akihabara and the incredible range of entertainment and restaurant options, Tokyo can make your travel budget disappear. You don’t need to blow your bank account! Some of the capital’s best attractions are free.

This list of 10 free things to do in Tokyo includes some of Japan’s most popular parks and temples. To reduce your travel costs even further, grab a discount one or two-day travel pass allowing unlimited travel over Tokyo’s rail and subway networks. This will both save time and money as you enjoy these ten free attractions in Tokyo.

1.  Tsukiji Fish Market:  One of the Biggest Seafood Markets in the World

Tsukiji Fish Market routinely tops “Best of Tokyo” lists. What’s even better is that it’s free! The only downside? To get the most out of Tsukiji Market, you’ll have to get up early.

Entrance to the market’s main event, the wholesale Tuna auction, is only open to 120 guests per day. Tickets are given out on a first come first served basis. The market opens for business at 5:00 A.M, but to be sure of securing a ticket, get there much earlier. Once inside, the energetic bidding and bustle of one of Tokyo’s biggest wholesale markets will challenge any preconceptions you have of Japanese people as shy and retiring.

Even if you’re not lucky enough to see the tuna auction, there are lots to see in Tsukiji’s outer markets, which offer food related goods and fresh sushi at competitive prices. The wholesale market winds down around 9:00 A.M., at which point anyone can enter. Keep in mind this is a place of business, not a tourist attraction. Leave large luggage behind and be aware of your surroundings. There will be workers zooming past you on forklifts and small trucks, but this adds to the high-energy environment.

**Tsukiji Market has moved to Toyosu and reopened as the Toyosu Fish Market. Check out the new Toyosu Market Website before you visit.

Check out this video for a detailed look into Tsukiji Market:

2.  Senso-ji: One of the Most Famous Temples in Japan

Senso-ji is Tokyo’s oldest temple, predating the city itself. The temple’s earliest incarnation dates from 628 AD when two fishermen brothers caught a Buddhist statue in their net. Their village headman realized the value of the statue and enshrined it in his house in Asakusa village. This simple shrine attracted pilgrims, and the temple grew into a multi-building temple complex. Tokyo eventually swallowed up the village, which is now Tokyo’s Asakusa district.

Today, a steady stream of visitors pass through Senso-ji’s distinctive Kaminari-mon (thunder gate) towards the main building. Although most of the buildings are recreations of earlier buildings destroyed by fire or earthquake, Senso-ji retains the atmosphere of an Edo-period temple.

The shopping street that greets visitors has been there for centuries, offering visitors the chance to purchase souvenirs or traditional snacks, like senbei (rice crackers) or kibidango (rice dumplings dusted with soy powder).

The main building has some interesting paintings, but the highlight is the view. The contrast between Senso-ji’s buildings and modern Tokyo, including the Tokyo Skytree, epitomizes Tokyo and is rewarding at any time of day or season.

Check out this video tour of Senso-ji:

3.  Meiji Jingu Shrine:  Culture, Nature, and Relaxation All in One

Meiji Jingu Shrine is one of Japan’s three most important Shinto shrines. It was created in 1920 to deify Emperor Meiji, who opened Japan up to the rest of the world and started its modernization process. Over one hundred thousand trees were donated from throughout Japan to create the shrine and the park around it.

Today, Meiji Jingu and its surrounding Yoyogi Park, offer an oasis of nature in the heart of Tokyo’s busiest districts.

Crowds flock to Meiji Jingu on December 31st to see the New Year rung in, and the shrine continues to be crowded until January 4th with people making their first shrine visit of the New Year. The bustle and festive atmosphere during New Years is fun but exhausting. The rest of the year, Meiji Jingu is a relaxed place to visit. Visit on the weekend for the chance of seeing a traditional wedding taking place. Afterward, relax in Yoyogi Park enjoying the sight of shoppers from nearby Harajuku wearing the latest fashions of Tokyo’s youth subcultures.

Check out this video tour of Meiji Jingu:

Ueno Park offers it all. The expansive park grounds include multiple national museums and a zoo, as well as temples and shrines that are free to enjoy—not to mention the park itself. In spring, Ueno Park attracts cherry blossom enthusiasts, while in the summer, Shinobazu Pond is home to blooming water lilies. There’s almost always something going on, as Ueno Park is a popular destination for buskers and food carts.

Ueno Park started life as the grounds of Kan’ei-ji Temple, favored by the Tokugawa shogunate. Ueno Park was the site of a battle between the shogun’s forces and those wishing to restore the Imperial family. Upon the shogun’s defeat, Imperial forces seized Kan’ei-ji, and its grounds became Tokyo’s first public park.

While Kan’ei-ji Temple did not survive the battle intact, Toshogu Shrine, also in Ueno Park, did. It is dedicated to the Tokugawa shogunate and is one of Tokyo’s best-preserved shrines. Yushima Tenjin (Tenmangu) is a shrine for scholars. My favorite is Benten-do, out in the middle of Shinobazu Pond.

5. Imperial Palace Gardens:  Something for Everyone

Honmaru has broad lawns, perfect for picnics or simply to relax in the sun. Ninomaru pays tribute to the castle’s former history with a Japanese garden maintained in Edo-period style.

The Imperial Palace Outer Gardens includes a 5 km jogging track that circles the palace grounds and gardens (the custom is to run counter-clockwise). Jogging facilities, such as water fountains, restrooms and showers can be found along the route, making it a low-budget way to not only see Tokyo, but get your heart-rate moving too.

Check out this video tour of the Imperial Palace Grounds:

If The Tokyo Skytree or Tokyo Tower are out of your price range, head to Shinjuku. The Tokyo Metropolitan Government Building Observation Deck offers the best free view of Tokyo from its political center.

Simply take the Observatory Elevator from the first floor of the main building. On fine days, the 202m high platforms allow you to see as far away as Mount Fuji. Nearer highlights include the Tokyo Dome, Skytree, Tokyo Tower and Meiji Jingu Shrine.

There are two observatories, located in the north and south towers. Both have a number of cafes and restaurants (careful—these are not budget friendly!), and the north tower observatory stays open later, with views of Tokyo at night.

Because the building is a government building, security measures are in place. Be prepared for a bag search and carry your passport in case it’s required.

Here’s a video tour of the Tokyo Metropolitan Building and view:

7. Shibuya Crossing: The Busiest Pedestrian Crossing in the World

You’ve probably already seen Shibuya crossing. In many ways, the crossing is synonymous with Tokyo itself. It features heavily in movies, music videos, and documentaries about Tokyo.

This is because Shibuya is the busiest pedestrian crossing in the world. The three giant advertising screens overlooking the crossing have become icons and led to comparisons to New York’s Time Square, but the crossing itself is the attraction. Watching the busy intersection comes to a complete halt for the crowds spilling out or into Shibuya Station is a sight that never gets old.

To get to the crossing, head for the station’s Hachiko exit. I prefer to watch the crowds from the Starbucks in the Tsutaya building, but while the Wi-Fi is free, the drinks aren’t. Head to the bridge linking Shibuya Station to Shibuya Mark City for a free view of the crossing in action.

Check out this video to see what it looks like:

Tokyo is home to an amazing collection of niche museums, many of which are free. My recommendation is the Advertising Museum Tokyo.

The museum has an impressive collection of ukiyo-e, the name given to the distinct style of Edo-period woodblock prints, in addition to advertisements of all ages. English explanations are minimal, but the visual displays speak for themselves.

The museum offers a history of Tokyo through the city’s history books can’t. It’s also an art museum, featuring art nouveau and art deco posters as part of its collection.

9. Odaiba: An Island Filled with Fun, Excitement, and the Statue of Liberty?

It takes a bit of effort to reach Odaiba. The reclaimed island in Tokyo’s Harbor is served by the special Yurikamome or Rinkai lines, or water taxis, none of which are included in discount tickets. If you’re really anxious to save yen, consider walking across Rainbow Bridge, one of Odaiba’s landmarks.

Once you reach Odaiba, you’ll find lots to do and see. Odaiba showcases the best of what modern Tokyo has to offer. Many big Japanese corporations locate their headquarters in Odaiba, complete with cutting edge architecture and showrooms.

If the weather is good, head outside to Odaiba’s beachside park, which includes pleasant walking and jogging trails and an artificial beach.

Odaiba has a few quirky landmarks to take in while you’re there. There is a life-size Gundam, an iconic battle robot from one of Japan’s earliest and best-loved animation series, and a replica statue of liberty among others. Odaiba is constantly changing. You’ll discover something new with every visit.

If catching a sumo match is out of your price-range, no problem.

Just head down to Tokyo’s Ryogoku district where the Ryogoku Kokugi-kan sumo stadium is located. This sumo district has many sumo stables, called beya, operating here. Many of the stables make their morning practice sessions, asageiko, available for tourists to watch.

Arashio is the most well known of the stables open to visitors and allows visitors to watch the morning practice from windows outside in a secluded back street. There are no reservations. You simply show up and watch. Arashio has English information on their website giving the date and rough times of practice, but if you can speak Japanese, it pays to call and get an exact time.

You can track down other stables that welcome visitors by looking at the Japan Sumo Association’s list of stables or asking your hotel. Most stables take holidays during March, July, and November and are closed the week after the Grand Tournament and on weekends.

Here’s a quick look at the sumo practice at Arashio:

Tokyo may be one of the world’s most expensive cities to live, but it doesn’t need to cost you a lot to visit and enjoy. How many of these sites will you be visiting? Comment below with your thoughts, or share with friends to secure yourself a travel mate—and halve your hotel fares.